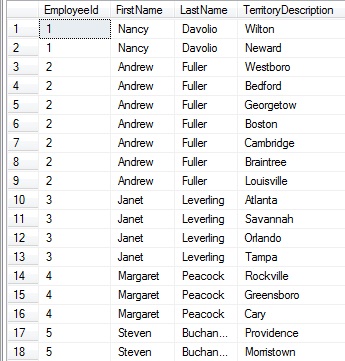 Thanks. Great Stuff. The other articles were showing examples of creating a list of columns and grouping from the same table. Yours was a clear example of three tables where there are two master tables with an integration table.

That is fantastic! Finally! Thanks for telling me about that, I hadn’t seen that yet, and now I’m pretty excited for it.

Hi Pete, thanks great query!. From your example, how would I be able to generate this in reverse. I have a table in the form of your result set needing to generate a dataset in the form of the Employees table, and I am stuck.
Thanks again.

Is is really easy. Basically, you just need to use the STRING_SPLIT() function and a CROSS APPLY

That code gives you the results shown here. https://www.peteonsoftware.com/images/202107/StringSplitCrossApply.jpg