How Deep is the Rabbit Hole 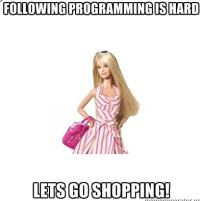 Rob Conery tweeted about a blog post that “Kakubei” made back in May of 2012. You can read about it over here.

I find it interesting that the author starts off the post making a comparison between himself and his brother. That his brother’s academic success and his own academic failings (and subsequent self-taught programming skills) are at odds and that the industry would view one of them as a “real programmer” and the other one as not a “real programmer”.

As I often like to point out, every programmer is a self taught programmer. You may get the fundamentals at college and learn some things that can make you more efficient or a better designer of computer systems, but with the pace that technology is changing, you have to constantly learn to keep up.

That being said, Kakubei’s main complaint is that Rails is hard to learn. He compares the canonical “15 minute blog” demos to what it takes to do “real world” Rails development and he comes up with a big differential.

What I find funny is that he seems to have come from a PHP background. That means that he had to know the PHP language, possibly a PHP framework (like Cake), HTML, CSS, JS, probably MySql, etc. I say that to say this, he had to know a lot to work and he wasn’t coming to Rails from zero.

The author complains that to use Rails, you have to know Ruby and that you have to know MVC, Gems, RVM, Active Record, HomeBrew, HTML, CSS, JavaScript/jQuery, Rake, Capistrano, etc. My point is that he probably already knows HTML, JS, and CSS. If he owns a Mac, he has probably already encountered HomeBrew (it isn’t just for developers). If not, this was a fine time to learn.

I think this all boils down to something else, though. What does it take to be productive or at least “mildly useful” in a language/framework?

To me, I was able to follow a simple Rails tutorial and starting using Rails almost immediately. Know what I didn’t need? RVM. Just starting out, I just used one version of Ruby and Rails. As for Gems, in order to do my tutorial, I had to say “gem install rails”, so I already had an idea how it worked. After that, you can pretty much avoid using it if you don’t mind rewriting code that is already a “solved problem”.

What about HomeBrew? Don’t need it. Active Record? All you need to know to actually make stuff happen is in the “15 minute” video. Same with the MVC pattern. I didn’t know anything about making MVC websites and I was up and moving with minimal instruction from the video. Rake? Didn’t need anything special there, either, because I hadn’t created a very complicated system yet. Capistrano? I need an automated deployment on day one?

My point is that every rabbit hole is very deep. .Net? WebForms or ASP.Net MVC? HTML, CSS, JS/jQuery. Dependency Injection with AutoFac/AutoMapper/Ninject. ORMs like Entity Framework, NHibernate, etc. Don’t forget the language (C# or VB.Net or F# or whatever). How about Nuget for package management? Don’t forget source control, like TFS or Git. What about knowing testing like NUnit, xUnit, MSTest? Deploying with MSBuild and MSDeploy or one of the bajillion open source tools?

I could follow the same path to describe getting started in web development with Node.js or Python or whatever you could think of. It is silly to think that you can go from 0 to Amazing in 15 short minutes. That pattern doesn’t work.

What you have to know is how to learn. You have to know how to Just-In-Time the information so that you can be productive from the jump off. Yes, that means that you’ll always be learning, but if that concept doesn’t excite you, then you are probably in the wrong field.

I believe that that sort of complaining (“The development stack is too deep/rich”) shows a certain level of professional immaturity.

I realize that after Rob tweeted, Kakubei added an update after people started commenting, saying:

“I’ve been using Rails for more than a year and I still use it. In fact, I’m in the process or rewriting our main application’s API in Padrino with ActiveRecord, Thinking Sphinx and deploying to Heroku and it has been a primarily positive experience despite some teething issues. The admin for our database I’ve written in Rails 3.2 and there is a lot to like there. The idea was to write another post after this one titled “Why I love Rails” but I never got around to it. Even though this post is a rant, I still feel that way about Rails, so keep those comments coming, but don’t feel you have to convince me that Rails is good, I just take umbrage with some of its complexities and with the people who sell it as being simple and easy to learn. In the meantime, I’ll keep ranting.”

I understand his response and understand that he was probably frustrated when he wrote the post and he is not really apologizing for it. That leaves me to still consider my criticism valid that I believe that he faced the problem all wrong (or at least described a method that did just that).

To me, you learn the basics of the thing. You see what skills you have that you can already reuse (HTML, CSS, JS, SQL, whatever). Then, you pick up what you need, working with the “training wheels” that the frameworks or languages give you. Then, steadily over time you start to grow and move deeper in the tooling until one day you are someone that others look to for advice.

That’s the only way we’re going to make it in this crazy development world.