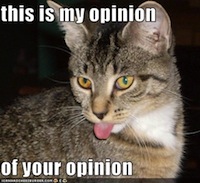 A blog post came onto my radar today after it made the rounds on Hacker News. It was by James Whittaker and it was titled “Why I Hate Search“. Full disclosure is that James works for Microsoft, so some people have the notion that he is just hating on search (and therefore Google) because it is in Microsoft’s best interests to do so. I am someone who typically takes someone at their words and – in cases like this – prefer to examine the argument based on the facts at hand.

James’ post starts off by talking about the entire notion of search is negative and is only actually positive when the search has concluded and you’ve found what you were looking for, be it car keys, a missing person, etc. He further argues that in “real world” searching, you learn from your searches and don’t have to start from scratch every time. For instance, if I lose my keys often enough, there are four or five places that I’ll check first and likely find them. His argument is that web search is a “start from scratch every time” proposition.

James claims that it is not in search companies’ best interest to make this problem better. Those that make money from ads (hi, Google), want you searching and spending time on results pages, generating impressions and click-throughs, and whatever else they make money on. In his estimation, the alternate to this kind of product is a “find engine”, like Siri. He points out that Siri comes from a company that doesn’t have a stake in search (Apple). His quote that summarizes this position is, “There’s no more reason to expect search breakthroughs from Google than there is to expect electric car batteries to be made by Exxon.” He says that “Search is dead. The web doesn’t need it and neither do we.”

It could be that I’m entirely too stupid to understand this post or that I’m not forward thinking enough. Siri barely works if you get outside of a very small comfort zone. The way that I use Google every day is that I search error messages, and bits of quotes or lyrics, and generic problems that I can barely phrase coherently. Things like “what is the default LDAP port for Active Directory”. I just asked Siri that and she did capture my question correct with voice recognition, but her response was “I don’t know that. Would you like to search the web for it?”. In the end, it was a Google search that was performed that gave me the answer of 389.

That example is a COHERENT question of mine. What about when I need to search for something like examples of calling a SOAP web service from Android? I Google “SOAP Android” and find answers. Even if I form that into a coherent question, “How do I call a SOAP web service from Android?”, Siri says, “I don’t see Soap Web Service From Android in your address book, should I look for businesses by that name?”. Siri heard “call” and thought telephone and then screwed up the rest of the message, even though SOAP and Web Service should have given the AI a semantic clue.

I don’t want to belabor the point, though. Natural language processing will get better. However, I think that it is a pipe dream to expect that I can ask my question and Siri or the great great great great granddaughter of Siri will just give me my answer. Often in my searches, what is the answer for me is not the answer for someone else. I just can’t fathom a reality in which I can ask one question and not have a list of answers (yes, search results) to pick from. Even on Star Trek: TNG, for the hard questions, Data would ask the computer a question and have to search through tons and tons of information flowing past the screen to find the results he was looking for.

Search isn’t dead. In fact, more and more products and companies are starting to get rid of boxes where you have to search with “context” (put the first name here if you know it, the last name here if you know it) and instead moving to “Google-style” searches. The “single search box” is here whether it is Bing, Google, Stack Overflow, Sharepoint, Wolfram|Alpha, or even implicit ones like on Siri. The only difference I see between James’ imaginary future and our present is the ability for someone to give you the “one answer” that you are looking for, instead of results.

I’ve learned one thing by watching users and that is that people SUCK at search and they SUCK at asking questions, too. As long as people can’t form coherent questions or at least isolate the important parts of their inquiry, I don’t think search will ever change from the lineage that we are on.