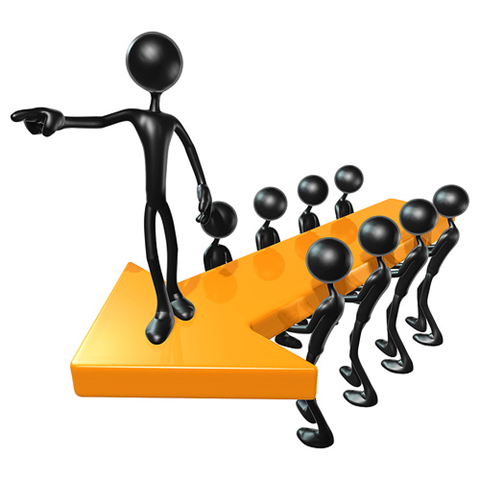 I have actually been slightly surprised to find that so much has already been written on this topic. Not because I thought that I had some original idea, it was that I was actually surprised that I didn’t know any of this literature existed until I actively went looking for it. More people in business need to understand this distinction between a manager and a leader.

My definition of “Management Position” means that some portion of the job is to write reviews, handle HR issues, balance departmental budgets, alot raises, and answer to someone about the productivity of your charges individually and your department as a whole.

Good managers who do all of this well are hard to find. Unfortunately, too many management positions are manned by people who were the best at whatever their department was responsible for doing. Often, the individual only took the job because it was the only decent way to get a raise and not because they had a passion to improve things through administration.

This is extremely unfortunate. What this company has just done is remove the person who is likely their most productive individual and put them in a position (VERY LIKELY without proper training) that Peter Principle’s them.

As I alluded to earlier, I am not speaking from the sidelines, but as one who was in the game. I wanted to make more money and I like to be a leader, so when a position opened up to be a supervisor at a place where I used to work, I leapt at it. I was one of the most (if not the most) productive worker in the building and one who didn’t shy away from doing what was right so I got the job.

That began my problems. My manager was removed from his position shortly afterward and I was named interim manager – a position that lasted for three months. My style of management was to “get in there and do the work”. If someone was falling behind, I didn’t coach them up… I bailed them out. If we had a big work day ahead, I came in early and got things started and prepared (or even done) for everyone else instead of trying to plan a schedule for others to help. That may sound great or heroic, but the problem was that a) I wasn’t doing anyone any favors and b) Pete don’t scale. This worked for one building and 20 employees, but if our workload or staff increased, I couldn’t bail everyone out at once. If someone quit one of the “higher responsibility” positions below me, no one had been trained up to replace them. I was blowing it, but I had no idea.

Fortunately, I did not get the permanent management position. They were prepared to give it to me, but another manager from Dallas, TX was looking to transfer and company policy gave him first dibs at the job. They apologized to me and thanked me for my efforts being both manager and supervisor for three months. The truth is that they did me a huge favor. The man who came in was a M A N A G E R.

I love setting an example. I love sharing my knowledge with others and setting a precedent, but I don’t like disciplining them if they fail to learn or improve. I love performing technical interviews for positions and giving input for hiring decisions, but I hate negotiating salary, benefits, and schedules. I love when things get busy and that means that I can be super productive while attending less meetings (that my manager has to attend in my stead). I don’t like playing politics to get my department what it needs, I like to occasionally rely on the fact that it is easier to ask forgiveness than permission. I definitely don’t like to play the game where you have to make other managers of other departments or divisions feel like they were involved in the decision so they can feel useful. I’d much rather hear the facts, decide the course, and take my troops into battle.

It seems that I have a very definite idea of what a manager does and I’ve now written much more about that portion than I had originally intended, but it feels good to get it out. What is unique about a manager is that you can (or should) only have one per spot and they can only exist in certain conditions. However, a leader can exist anywhere in your organization. You can have a leader in the receptionist’s chair, the custodial team, the accounting division, or in your auditing department. He (gender neutral from here on out) can be a software architect, a lead developer, junior developer, business analyst, or QA guy. I’m not even creating a dichotomy that says that managers can’t be leaders, too. You can have managers and executives that are leaders, too (in fact, I *pray* that you do!).

What matters is that he has a vision, acts on it and causes others to follow him to act on that vision. In finding other literature on this topic, I came across these two quotes which best sum up what I’ve been trying to say:

I hope that this is some food for thought for other Type-A’s out there as to maybe how you can best use your energies depending on what portions of the above got you excited. Not everyone can be *the* leader though, and I will be writing very soon about the importance of learning how to follow.