If you haven’t read my first NUnit post and aren’t familiar with NUnit or TDD, you might want to check it out here.

Last time we just looked at the basic ways that you make tests and use the test runner to verify their results. In this post, I’d like to examine how you might go about doing true “Red. Green. Refactor.” Test Driven Development (TDD).

First, I’d like to make a new C# Class Library Application named MathHelper. Rename Class1.cs to MathClass. Additionally, immediately add another project to the solution. Right click on the solution, Add-> New Project. Choose a Class Library Project and call it MathHelperTest. Rename Class1.cs to Tests.cs. Add a reference to the nunit.framework dll and the output from our MathHelper project. Your Solution Explorer should now look like this. 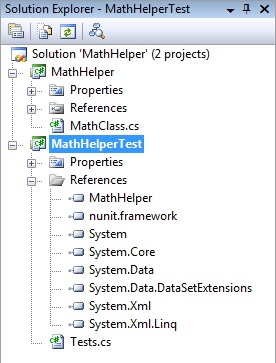 Now, we do need to have something so that the test class will compile and we do have a general idea of what we need from requirements gathering, so put the following code in the MathClass.cs file inside the MathHelper project.

What you can see is that I’ve stubbed in the methods that I expect my class to contain. What I’ve also done is make sure they all throw NotImplementedExceptions when they are called, since I’m not writing any functional code until after I write my tests.

So, lets write some tests already! In Tests.cs inside of our MathHelperTest project, enter the following code.

Okay, for the sake of simplicity, lets fire up our NUnit GUI and load the MathHelperTest.dll and run our test suite. (If you are unsure how to do this, please refer to my initial NUnit post). It should come as no surprise that all four of our tests failed with Not Implemented failures. Now, lets go back and add some code to make the tests pass.

Change the code in MathClass.cs to this:

Run the tests again and they should all 4 pass. Woohoo, we’re done, right? Well, not exactly. First of all, our test coverage met the minimum requirements, but didn’t really test the code very well. Secondly, our Math implementation isn’t very great. Let’s solve the first problem first and add some more tests.

When we rerun our tests in the NUnit Test Runner, we now see that two of them fail (TestDecimalExponent and TestNegativeExponent). Lets see if we can fix our code. MathClass.cs should now look like this.

Okay, all tests pass. Now, lets see if we can do the Factorial method a little better and use a little recursion. We can safely experiment, because we know that our unit test will ensure that it still returns the correct value.

Run the tests and we’re still green, so we’re good. You would continue to go on in this manner. Add additional tests first to test functionality, then code the functionality, then refactor your code to make it efficient, extensible, and maintainable and run your tests again until all is green.

I understand that we could take this sample code further, write more tests, and create better code, but that is always the trade-off. You have to take into account where your code will be used, how mission critical your app is, and decide what level of risk your code can have due to anything less than 100% brilliant testing with 100% code coverage.

The red refers to writing the tests for what you want your code to do before you write the code to do it. When a test fails in NUnit (and other Testing Frameworks), they show up as red. Next, you write the actual functional code to make the test pass (green), and then you refactor the code so it is as clean, extendable, testable, and maintainable as possible. Then you run the tests again to make sure that none fail. If they do, you fix your code so that the tests can pass again. You repeat this process as much as is prudent for the project that you are on.

The extra added benefit is that you can feel safe in making changes to your code later. If you have written sufficient test coverage, you can run your tests and if they all pass, then your changes will cause no problems when you deploy.

Now, on to NUnit. NUnit is the first unit testing framework that I ever heard of or used, so I have a soft spot for it. You can get started by downloading NUnit from their download page here. The easiest way to get going quickly is to pick the download named NUnit-2.4.8-net-2.0.msi and then just run the install wizard.

Once you have everything installed, let’s get started. For a sample, let’s just make a new C# class library project called NUnitExample. Add a reference to nunit.framework.dll that can be found at (if you accepted the defaults on install) at C:\Program Files\NUnit 2.4.8\bin\nunit.framework.dll.

Now, enter the following code into the default Class1.cs file and build the project:

Now, fire up the NUnit Test Runner GUI. It is located at C:\Program Files\NUnit 2.4.8\bin\nunit.exe. When it opens, click File –> Open Project and then navigate to the .dll that was created from the project that you built and click “Open”. 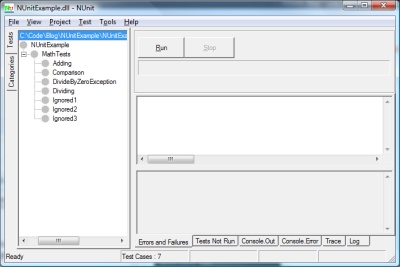 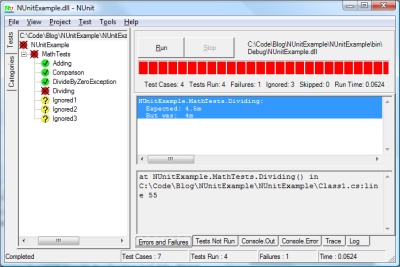 What you see is that the entire test fixture of NUnitExample has failed (the red circle with the X). Parent levels are always shown as having the same success level as the lowest success level below it. You see that Adding, Comparison, and DivideByZeroException passed. No surprise here. Additionally, the three tests named ignored have been ignored because their signatures were incorrect. If you click the “Tests Not Run” tab at the bottom of the runner, you can see why.

If you click the “Errors and Failures” tab, you will see why the Dividing Test failed.

Oh, yeah. Integers only hold whole numbers. Lets go back and change the code. (Normally, you’d change your code, but here the “active” code is embedded in the tests because of this simple sample.) Change the Dividing test to the following:

When you switch back to the NUnit Test Runner, it will have automatically refreshed because the test project has changed. Run it again and the Dividing test will pass and the overall status will be yellow because the lowest level of success in the child tests was also yellow.

If you instead would like to use the command line for NUnit (perhaps for continuous integration or just as part of your build task on your program) you can do that as well. Open a command window and enter the following command: (If you changed anything on NUnit install, change “c:\Program Files\NUnit 2.4.8\bin” to match your install path. The argument passed in is the path to the .dll of the project that you created.)

When you run it, you get the following results:

In a later post, I will look at doing Test First development with a true “Red. Green. Refactor.” feel.