This code covers every possible value for x and therefore is logically exhaustive. However, as it is, it also causes the "error: switch must be exhaustive, consider adding a default clause" error to appear. I have to change the code to this for it to work:

I also added another interesting feature of Swift's Switch statement and that is the ability to make a local copy of the variable and then use that to make any comparison rather than to compare only against a constant. That is another very powerful feature. 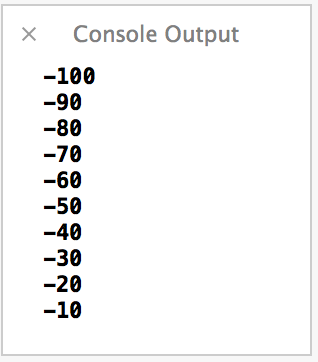 But, what if our original value was 10, like this? Our code wouldn't do anything.

Now, we execute at least once before we see that we don't meet the conditions.

If I'm doing a range, though, I can also declare that range in a Ruby-ish way.

That's it for control structures. Next time, we'll take it up a notch and take a look at declaring and calling functions in Swift.

Last time, we had a small intro to Swift and saw how to declare simple variables and do some string work. This time, we are going to look at some more complex types and take a look at how Swift does iteration over collections.

To declare an array, you can just use this simple syntax. Note that unlike Objective-C, you don’t have to nil terminate the array. Arrays are also zero-based, so given the array below, the value of favoritePodcasts[0] is “Hanselminutes”.

The dictionary syntax is very similar to the array syntax and looks a lot like JavaScript JSON syntax.

To access one of the entries, you just call it with the key, like JSON. In this case podcastHosts[“iPhreaks”] would be “Charles Max Wood et al”.

If you want to just declare an array or dictionary, you just use this simple syntax.

Now, let’s look at how we can iterate over these collections. This should be very comfortable syntax if you are familiar with JavaScript, minus the parentheses.

This gives us the following output in the XCode Playground when I include it after the code that we’ve already written:

Let’s take this up another notch and for each podcast, pull out its hosts from the dictionary and write those hosts to the console. We’ll use the iteration flow we just covered, the key-value dictionary retrieval syntax, and the string interpolation that we looked at last time to accomplish this.

That will give us this result to the console:

That gives us the following output:

It is interesting to note that I did not change anything. It did print out of order with how I added those items. The dictionaries are definitely not expected to keep any kind of order for you when you iterate over them.

That’s it for this time. This post was starting to get a little long, so I’m going to save control flow for next time to try to keep this as focused and non-rambling as possible.

Intro to the Swift Programming Language

The biggest story out of the 2014 WWDC Keynote was easily the introduction of the new Swift Programming Language. Not to be confused with another language called Swift, a completely unrelated language used for parallel scripting, Swift is a fast and modern language that designed for safety.

When I say that it is fast, what does that mean? During the keynote, they gave a benchmark sorting a list of objects. They declared Python to be a baseline and claimed that Objective-C was 2.8 times faster than Python. That makes sense because Python is typically interpreted (as it most likely was for this benchmark) and Objective-C is compiled. So, what about Swift? Swift was 3.9 times faster than Python, an impressive improvement over Objective-C.

What about something a little more computationally difficult? With Python again as a baseline, RC4 encryption is 127 times faster in Objective-C. However, Swift is actually 220 times faster than Python, which is an even larger gap than the more simple object sort benchmark. I think we might be beginning to see where the language’s name came from.

What about the “designed for safety” part? What does that even mean? What that means is that you literally cannot shoot yourself in the foot with many common errors because they are just not possible in the Swift language. You cannot cause buffer overflows, operate on uninitialized variables, use Gotos, perform unsafe string formatting, etc. The language is set up in a way to allow you to “fall into the pit of success” with regards to many language errors that leave security holes.

What about modern? One thing is that Swift has modern features like closures, generics, namespaces, type inference, and multiple return types. The other thing is that the language syntax feels very modern. It feels a lot like Ruby and JavaScript and it ditches a lot of the “ceremony” that you had to adhere to when writing Objective-C. I’ll admit that I hated Objective-C, but Stockholm Syndrome has set in and I have actually enjoyed using it of late. I’ll be interested to see if the Ease of Use™ of Swift will make my Stockholm Syndrome fade away and make me see what I’ve been missing.

The other really neat thing about Swift is its REPL, which is implemented in Xcode Playgrounds. A playground looks like this:

This playground example also demonstrated some of the syntax. Like Javascript and C#, you can just declare the variable with the var keyword and its type will be inferred. The let keyword creates a constant. If we need to help Swift infer a type, we can use the :Type syntax. We can see examples of all three of these below:

Types are still very important to Swift, though. For instance, if I try to execute this code:

If I do that, I get the error “‘String’ is not convertible to ‘UInt8′”.
Update 7/16/2014 – As of Xcode 6 Beta 3, this error changed to this from the previous error of “Could not find an overload for ‘+’ that accepts the supplied arguments”

Instead, I have to explicitly cast the int to a string like this:

One final example in this simple introduction to Swift is the much easier way to do what I just did above. Wouldn’t it be easier if I could do something like C#’s String.Format() or Ruby’s string interpolation? Yes it would, and yes I can! My previous example could also be written this way:

And what if I wanted to execute a little bit of code via an expression in there? I could easily do that like this:

This post just scratched the surface of what Swift is and how its syntax can be used to handle simple variables. In my next Swift post, I’ll cover some more complex types, control flows, and how to declare functions.

In episode 16 of the podcast, I recapped the 2014 Worldwide Developer’s Conference (WWDC). I had the keynote on in the background when it was broadcast (Monday, June 2nd), but I hardly paid attention to it. I was getting regular updates from co-workers and I saw Twitter explode when Swift was announced. I also went and read recaps and listened to other podcast recaps, but they didn’t really hit on the details. They focused on the headlines.

I had it in my mind that day to do a WWDC recap episode, but I needed to make the time to watch the 2 hour keynote for myself and take copious notes. I finally tackled that yesterday and sat down immediately after and shared my thoughts in this latest episode. This is actually my longest “solo” episode at 27 minutes, but I really tried to have it as full of material as possible. If you have been interested in the keynote and didn’t have time to watch it (or just wanted to hear my thoughts), check out this episode!